According to Kern County Director of Airports Mark Witsoe, work on Runway 12L-30R has been completed in three phases over four years. The runway opening means the airport can more effectively keep the takeoff and landing of heavier commercial aircraft separate from smaller, lighter planes.

Witsoe said he and airport staff were thankful to see the runway, which is more than 10,000 feet in length, open in time for the busy holiday season.

“Granite Construction and airport staff are deserving of recognition for a smooth construction effort,” Witsoe said in an email. “Work continues in February and March to apply back-ordered airfield markings and to finish work on the parallel runway.”

The cost of this third and final phase of the runway project including construction, administration, inspection, and material testing was $14.5 million, said the new airport director, who stepped into his position Oct. 1.

In total, the cost of rehabilitating Meadows Field’s main runway is nearing $50 million, Witsoe said. Most of the expense was supported through grants from the Federal Aviation Administration’s Airports Improvement Program.

It was announced in September that the airport would receive a $1.3 million infrastructure grant from the Federal Aviation Administration for taxiway repairs.

The grant was part of a $586 million package of infrastructure grants announced by the FAA.

At the time, U.S. Department of Transportation Secretary Elaine Chao said Airport Improvement Grants are “investments in our country’s critical infrastructure. She characterized it as a “down payment to ensure Meadows Field remains an economic engine as demand grows.”

Work on Taxiway Alpha, “that’s the next thing down the road,” Witsoe said Wednesday. “You begin by developing a thorough design, then you do the construction in phases.” 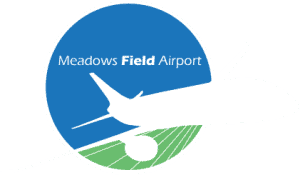